I just completed a rather dumb training cycle. With just a few sub-100 mile months under my belt after two months of near zero training due to injury and a cross country move, I decided last fall to run a spring marathon … and to use the Hansons Marathon Method Advanced Program to help me achieve that goal.

So I went from less than 100 miles combined over last June, July and August, 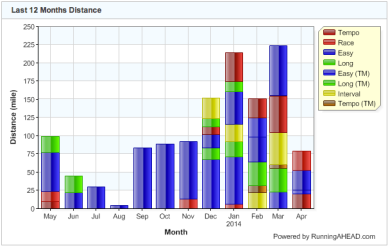 and September, October, and November each in the 80-ish mile range, to cranking out four consecutive 150+ mile months (two of those months over 200 miles) in my marathon training program.

It felt great at times. But it also hurt at times. On race day I met my goal of running a sub-3:30 marathon, but I wasn’t quite ready for it. I don’t recommend this kind of running. I needed more of a base, and a more gradual increase in my weekly and monthly mileage. (For the long boring race report/post-mortem of my race, visit my Running Ahead training log here).

So now I’m building a base. Runners with a strong base are stronger, better runners. I want to be a stronger, better runner. I’ve never built a base, but have mostly geared up for races, finished the races, and then – due to injury or life change – stopped running for a period. I’m done with that kind of running. Now is time to build the base.

Though I have some racing goals in mind, my primary goal now is to just keep running, with less intensity but with disciplined regularity, to build my mileage base, get stronger, and increase my endurance. From weeks in the high 50s and low 60s during my marathon training plan, I’m dialing back to 35-40 miles per week (150 miles per month). But unlike I’ve ever done, I hope to string together several months of regular running with consistent miles. Perhaps I’ll intersperse these miles with a few races, but the primary focus will be the disciplined, yet less exciting, goal of building a base.

Still, I have a few race goals for the next few months. For one, I want to go sub-6:00 in the mile. When I was 16 years old I ran 4:23. Those days are LONG gone. However, last year I did surprise myself in an open mile in Minneapolis and ran a 6:03. With more training already this year than I had at that time last year, I am pretty confident I can go under 6:00 – perhaps even close to 5:50 … but we’ll see. I’ve signed up for the inaugural Monumental Mile on June 5 in downtown Indianapolis. Should be fun.

So the goal for the moment is base-building. Get out there and run 5-6 miles three days/week (easy pace); 7-8 miles two days/week (with a moderate tempo and/or fartlek workout); and a 10ish mile long run. Though I’ve just trained like a madman with 3:50am alarms and 12-14 miles before sunrise some days, this shift to a different kind of training is likely to be my hardest challenge yet.